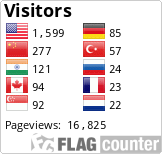 MATLAB or FORTRAN for Engineering Problems →